Andy Harris Cares about His Own Health Care, But Not His Constituents’ 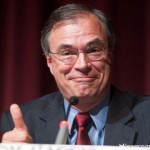 It is outrageous that Representative-Elect Andy Harris, who opposed health care for people as a state senator and a candidate for Congress is now demanding government subsidized health care for himself a month early. Maybe he will learn what it would be like for the millions of Americans, and hundreds of thousands of Marylanders, who would be without health care indefinitely if he got his way and the new federal health care law was repealed.

We at the Maryland Citizens’ Health Initiative have long known that state senator Andy Harris does not support state or federal health care reform. This was evident when he voted against the 2007 Medicaid expansion, that provided health care to over 65,000 Maryland parents. More recently, Senator Harris’s adamant condemnation of federal health care reform played out on the campaign trail as he challenged Congressman Kratovil in Maryland’s First Congressional District. While campaigning, Harris continually reiterated his commitment to repeal the federal health reform law that will expand health care to hundreds of thousands of Marylanders and save the state a billion dollars in health care costs.

Andy Harris was victorious in the November election, but his first order of business in Washington, D.C. was not to help his constituents, but to help himself to health care benefits. According to Politico (GOP frosh: Where’s my health care?), Rep-Elect Harris was outraged to discover that he, like hundreds of thousands of Marylanders, will be uninsured since his government-subsidized health care benefits do not take effect until 28 days after he officially takes office. Unlike most uninsured Marylanders, Andy Harris knows that he will be uninsured for only one month, and that is if he does not extend his current benefits through COBRA. But due to his frustrated reaction to the news, he clearly knows that health care coverage is important.

Last modified: November 16, 2010
← Previous Story: Health reform in your hometown
→ Next Story: Bartender, a little more tax in the mix