Some support idea of increase in alcohol tax

The proposed Lorraine Sheehan Dime a Drink tax would pour $215 million into Maryland’s economy. David Wells, owner of The Wine Source in Hampden, is all for it. 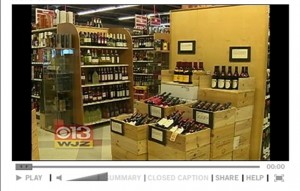 Some lawmakers in Annapolis want to add a dime to your drink.

A Baltimore City businessman is putting in his two cents on a proposed 10-cent liquor tax.The proposed Lorraine Sheehan Dime a Drink tax would pour $215 million into Maryland’s economy. David Wells, owner of The Wine Source in Hampden, is all for it.

“I don’t think it will have a negative impact on business because what we sell here are not life’s necessities.  We are not talking food, clothing or shelter,” Wells said.

Taxes would go toward healthcare, fund programs for people with disabilities and offer alcohol prevention and treatment programs.  Wells believes the extra cost could also reduce underage drinking.“I will sleep better at night knowing we are doing all we can to work on or address negative aspects of the products we sell,” Wells said.

Many people we spoke with say they don’t mind paying an extra dime for a glass of wine if that tax money goes toward helping someone else.  As for whether it will curb teenage drinking, they’re a little skeptical.

“When I was a kid, it didn’t matter what it cost.  We would get what we needed to satisfy what we wanted,” said Paul Sheitel.

“I think kids are going to drink no matter the cost and they will do whatever it takes to get whatever they want to drink, so no, it won’t make any difference whatsoever,” said Jan Crye.

It makes a difference to liquor distributors, who will be taxed almost seven percent. The tax would cost moderate drinkers about $11 a year.  If that bill passes, 15 percent of the tax will go toward the state’s Addiction Treatment, Prevention and Recovery Fund.The last time Maryland’s tax for beer and wine was increased was back in 1972.