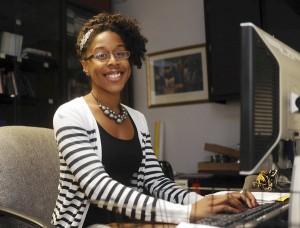 When Tamisha Jackson turned 22 and graduated from college last year, she was pushed off her parents’ health insurance plan.

Since then, she’s become a graduate student in women’s studies at Towson University but hasn’t been able to foot the $1,400 annual bill for coverage from the school. To compensate, she’s been popping vitamins and watching her step.

“I just didn’t want to have to pay such a large sum,” said Jackson, who lives with her parents in Prince George’s County” and works as a graduate assistant in the school’s Center for Student Diversity. “I’ve been fortunate not to have serious issues.”

Jackson is a member of the largest group of uninsured Americans: young adults. Close to a third of those between 18 and 24 years old lack coverage. But when a provision of national health care reform kicks in Thursday, she and thousands of others like her in Maryland–and millions nationwide–will have the option to return to their parents’ insurance plans.

Other provisions will also become effective Thursday that, among other things, ban lifetime benefit caps, require no-cost preventive medical services such as mammograms, and begin to close the so-called “doughnut hole” for seniors on federal prescription drug plans. The more costly and complex insurance exchanges, which will allow the uninsured to shop for coverage and subsidies, won’t go into effect until 2014.

The young adult provision is among the less controversial provisions and isn’t expected to have much of an impact on premiums in general. Supporters say it also could help fill the health care system with healthy people, supporting a pool that will eventually take on more sickly patients.

The conservative Heritage Foundation, however, notes that several insurers have attributed a portion of this year’s rate hikes to all the new provisions.

Many Americans also remain opposed to the law in general because of the cost to expand government programs. Republicans in Congress have made it an election-year issue, leading some Democrats to distance themselves from the reform package. The Republicans say they will try and repeal the law or block funding for some measures.

And just because insurance is available doesn’t mean everyone will take advantage of it. Jackson will return to her parents’ health insurance plan as soon as possible, but she said that many of her friends who have gone without insurance for long periods are likely to remain uninsured for now. Either their parents won’t add them to their policies, or they don’t believe they need coverage.

Supporters believe the new provisions will put a dent in the number of uninsured, some 741,000 in Maryland and 50.7 million nationally, according to new U.S. census figures. The government estimates that up to 2 million young adults nationally and 18,000 in Maryland will enroll in their parents’ plans in 2011.

President Barack Obama visited Wednesday with Americans who are benefiting from the new health care law as he marked the passage six months ago of the landmark legislation.

“When I came into office, obviously we were confronted with an historic crisis,” Obama told a small gathering in the backyard of a Virginia man who suffers from hemophilia and hit a lifetime limit in his health coverage. Obama also met Wednesday with state insurance commissioners whom the administration is counting on to protect consumers from excessive rate hikes by insurance companies.

As for the young adults provision, many health insurers, including Aetna, Humana, WellPoint, CareFirst BlueCross BlueShield and United Healthcare, extended policies immediately after overall health care law passed in March, so there would be no disruptions for those graduating from college. Jackson, and those whose parents are on other plans, will be able to return to coverage during the next enrollment period.

Some young adults already have been afforded coverage in Maryland, one of several states that have enacted protections in recent years.

The state requires large employers with private health insurance plans to allow unmarried dependents to remain on their parents’ policies until they are 25. The federal law is even broader; it will require another year of coverage, will include married children and will apply to self-insured employers and the federal government, which employs Jackson’s parents.

Vincent DeMarco, president of the advocacy group Maryland Citizens’ Health Initiative, plans to highlight the changes at rallies in Towson and College Park Thursday. He said the provision will reduce the number of uninsured in the state, even though Maryland has a law on the books.

“There are important new categories of people who will qualify,” DeMarco said. “This will be good for everyone.”

DeMarco said that the young uninsured will use the emergency room less, bringing down the amount of uncompensated care now provided by hospitals. And he said young healthy adults are crucial for the system’s long-term sustainability.

At Towson, 8 percent to 10 percent of the students did not have insurance in 2009, according to a university survey. Many students remain on their parents’ insurance, but if they need coverage, they have to buy the Aetna plan offered by the university or find outside coverage.

Dr. Jane Halpern, director of the student health center, hopes more people take advantage of the new provisions. Her clinic provides primary care for a fee to those without coverage, but when those students need a specialist or lab tests, she has to hunt around for discounted care for them.

Halpern said she tries to make students aware of insurance options, and the school has provided information in its daily e-mail to students and on its website.

“They need to understand they may not be able to pay their tuition and their medical bills if they get really sick or in an accident,” Halpern said.

The event Thursday aims to make such a point. University officials, students and DeMarco will be joined by representatives from the Young Invincibles, a national organization founded by students pushing for better care for young adults. It’s helping host 80 events Thursday in 25 states.

Aaron Smith, a co-founder and executive director, said he and friends formed the group more than a year ago because they knew people who were having a tough time finding jobs that provided health insurance. Nearly three-quarters of young adults do not have health insurance through an employer, he said. He wanted to advocate for them as reform legislation was moving forward.

The young-adults provision was a top priority for the group. And while it won’t help everyone, it will add an option, Smith said.

“Right now, there are few options to get affordable insurance,” he said. “In this economy, this is one less thing for people to worry about, and for their parents to worry about. Their kids can get insurance while they are looking for a job. It’s exactly the right time to have something for young people.”

He said the reforms will help different sets of people, many who already have insurance, by providing no-cost preventive care and aid to seniors on Medicare. He also noted that others will keep or gain insurance through small employers eligible for subsidies. Children under 19 can no longer be denied coverage because of pre-existing conditions and there will be no lifetime limits on benefits.

“All these things will provide some help in dealing with the huge number of people in need,” he said.

The federal government estimates, for example, that up to 72,000 uninsured children will gain coverage because they can no longer be denied insurance. And once lifetime caps are gone, up to 20,400 annually will remain covered.

Beth Sammis, acting commissioner of the Maryland Insurance Administration, said state residents have been gaining extra protections over the years. For example, the young adult provision has been in effect since 2008. But Sammis said about the federal law, “I do think these are incremental improvements for Maryland.”

John Colmers, secretary of Maryland’s Department of Health and Mental Hygiene, said that taken together, the new federal provisions will fill some gaps in the state coverage.

More will gain coverage and benefits over time. He co-chairs a panel that is working to implement the entire reform package. Currently, work groups are meeting and will recommend steps the state needs to take to, for example, set up exchanges where the uninsured can shop for coverage.

Colmers and Sammis didn’t anticipate any trouble implementing the newest provisions. The insurance administration reports that no insurers left the market after changes the state made.

In response to the federal rules, however, Aetna has told officials it will no longer offer “child only” policies because of the ban on considering pre-existing conditions for those 19 or younger. An Aetna spokeswoman said the new policies would be too costly and would drive up costs for existing customers.

“We’ve already done more than most states, and these [new provisions] are more modest changes for us,” Colmers said. “Still, these are tangible benefits. … We’ll need to figure out ways to clearly and accurately convey information to many different audiences.”

Here’s a selection of provisions of federal health care reform go into effect this year, with most effective Thursday.