A push by public health advocates to increase the tax on cigarettes, cigars and smokeless tobacco has gained momentum in Annapolis. 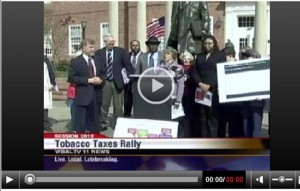 ANNAPOLIS, Md. — A push by public health advocates to increase the tax on cigarettes, cigars and smokeless tobacco has gained momentum in Annapolis.

The argument in support of the legislation is straightforward: teens who cannot afford to purchase cigarettes turn to the more economical small cigars. The legislation would tax cigars and other tobacco products at the same rate as cigarettes, WBAL-TV 11 News reporter David Collins said.

Critics contend that doing so would create another financial burden for consumers and business owners.

Supporters countered that raising the price has proven effective in stopping people from picking up the habit — especially kids with limited incomes. A poll taken last fall supports the point that even kids are budget-minded.

“We know from the cigarette tax increases that costs count with kids. Children basically stop buying and stop using cigarettes when the costs gets beyond their means. Other tobacco products have not kept pace and now we have them flavored in everything that an ice cream cone can be flavored in. Certainly they are marketed to our children and we say cost them out of their reach,” said Baltimore City Councilwoman Mary Pat Clarke, D-District 14, who spoke at a rally Wednesday in Annapolis.

The tax on cigars and other tobacco products has not changed since 1999. An increase would generate $20 million for Maryland, Collins reported.

A Senate committee heard testimony Wednesday, and the House is scheduled to take up similar measures on Friday.