The pair of bills are backed by some top Democrats, the Legislative Black Caucus and an array of interest groups representing doctors, seniors and minorities. 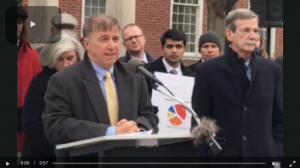 The Baltimore Sun, by Pamela Wood

The pair of bills are backed by some top Democrats, the Legislative Black Caucus and an array of interest groups representing doctors, seniors and minorities.

“This is an attempt to make sure Marylanders can afford the prescription drugs they so desperately need,” said Vincent DeMarco, president of the Maryland Citizens’ Health Initiative, which is running radio ads in support of the bills.

The pharmaceutical industry already is fighting back.

As DeMarco and members of his coalition touted their initiative during an event on Lawyers Mall in Annapolis the day before the start of the General Assembly session, representatives from the Pharmaceutical Research and Manufacturers of America watched from the back of the crowd.
Caitlin Carroll, PhRMA’s director of communications, said the bill requiring drug companies to explain their prices would require them to release trade secrets, which would hinder the competitive business of developing new drugs. Competition, she said, is necessary to keep prices low.

“The increased reporting in this bill would diminish competition,” she said. “We should be increasing competition, not delivering on less.”

The anti-price gouging effort will involve two bills in the General Assembly.

One would require drug companies to explain how they determine the prices for their drugs and to provide public notice when they plan to increase drug prices by 10 percent or more.

“It asks for transparency and it asks for notification,” said Del. Eric Bromwell, a Baltimore County Democrat who was just promoted to vice chairman of the House Health and Government Operations Committee.

Vermont is the only other state with a similar law, but their version only requires pricing information for the 15 most expensive drugs, DeMarco said. Several other states are considering similar legislation.

Another bill would allow the attorney general to take drug companies to court for excessive price increases.

“We’ve seen in Maryland and all over the country drug prices skyrocketing,” said Frosh, a Democrat.

Maryland would be the first state to have such a law, DeMarco said.
The Legislative Black Caucus is expected to announce on Wednesday that the drug bills are among their top priorities this session. Baltimore County Executive Kevin Kamenetz also said the drug legislation is among his priorities. The county government has 25,000 workers, and the county’s cost of providing prescription drug coverage for its employees has doubled in the past 10 years, he said.

Backers of the bills said they’ve briefed state health officials but have not yet pitched their plan to Gov. Larry Hogan or Insurance Commissioner Al Redmer.

Hogan “recognizes it’s an important issue and there will be a lot of debate,” said Amelia Chasse, a spokeswoman for the governor. The governor will review the legislation if it is passed by the General Assembly.