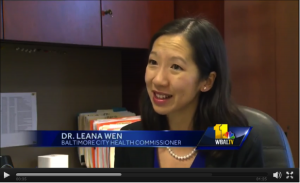 Lawmakers are considering a proposal to raise the current $2-per-pack tax by $1.

“The effect is the biggest among youth. Studies have shown that a 10 percent increase in price will cause 7 percent of youth to not smoke,” she said.

Wen testified in Annapolis on Wednesday in support of the tax. She said the numbers tell the story.

In Baltimore City, Wen said one in four adults smokes, one in six teens smokes, and one out of every 10 middle school students is lighting up. She said many start with flavored cigars and cigarettes.

“It gets them to become addicted, which then causes a lifetime of health problems and early death,” Wen said.

If lawmakers approve the proposed hike, Maryland will join six other states with a cigarette tax of $3 or more.

“There will be some news this session, but it’s an issue that those of us in the science and medical community will continue to push here in Maryland and across the U.S.,” Wen said.