Overhaul of health law faces criticism from both sides in Maryland

Health care advocates and Democratic lawmakers in Maryland called a newly released GOP plan to replace the Affordable Care Act a threat to coverage for more than 400,000 state residents, while top Republicans, including Gov. Larry Hogan, argued that the law must be changed to preserve access to health insurance. 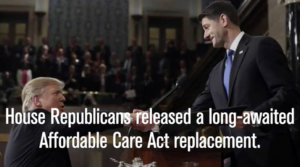 The Baltimore Sun, by Meredith Cohn

Health care advocates and Democratic lawmakers in Maryland called a newly released GOP plan to replace the Affordable Care Act a threat to coverage for more than 400,000 state residents, while top Republicans, including Gov. Larry Hogan, argued that the law must be changed to preserve access to health insurance.

“The governor doesn’t want to see anyone losing health care,” said Doug Mayer, Hogan’s chief spokesman. “But he wants a system that works.”

But even Mayer characterized the plan congressional Republicans released Monday evening as “just a first draft” for replacing the health law known as Obamacare.

Even as Democrats attacked the plan Tuesday for threatening coverage and increasing costs, it was rejected by Republican deficit hawks, panned by party moderates and given only lukewarm support from President Donald Trump. Conservative lawmakers and outside groups, bristling at the creation of a government entitlement, dubbed the bill “Obamacare 2.0” or “Obamacare lite.”

“This is not the Obamacare repeal bill we’ve been waiting for,” said Sen. Mike Lee, R-Utah, who is leading the GOP opposition with Sen. Rand Paul, R-Ky., and Sen. Ted Cruz, R-Texas.
While Trump embraced “our wonderful new health care bill” in an early-morning tweet, he also called it a starting point “for review and negotiation,” which invites alternative proposals that could prolong debate.

Many were trying to sort out the details of the measure, which puts caps on Medicaid spending and replaces federal subsidies for private insurance with tax credits that could be smaller for many consumers.

Maryland could be hit harder than other states that were “less successful” in expanding coverage, said Jonathan Weiner, a health policy expert at the Johns Hopkins Bloomberg School of Public Health.

“Trumpcare probably will not be as bad as some have feared, but nationally it looks like there will be more losers than winners among those currently enrolled in Obamacare,” he said.

“President Trump promised that the Republican plan would ‘have insurance for everybody’ that is ‘far less expensive and far better,'” said House Democratic Whip Steny H. Hoyer. “Instead, the legislation …would kick millions of Americans off their health coverage and force millions to pay more for less.”

The nonpartisan Congressional Budget Office is expected to report soon on the bill’s costs and the number of people who would lose or gain coverage.

Maryland officials will also assess the measure, and Hogan will pass on his conclusions to leaders in Washington, including Vice President Mike Pence and Health Secretary Tom Price, Mayer said.

While declining to comment on specifics in the new bill, Mayer said the governor supports continued coverage for Medicaid recipients, allowing parents to keep their children on their health plans until age 26, and preventing insurers from denying coverage to those with pre-exisiting medical conditions.

Rep. John Sarbanes, a Baltimore County Democrat, sent a letter Tuesday to Hogan asking him to make more of a public push against repeal of the health law, as other Republican governors have done in seeking to prevent a rollback of the Medicaid expansion. He also sought an analysis from the governor’s office of possible effects of the bill.

Sarbanes sits on the House Energy and Commerce Committee, which will begin debating the proposal Wednesday.

“As the only member of Maryland’s House delegation to sit on this committee, it is critical for me to have as much information as possible about how this plan may impact our constituents and our state,” he wrote. “I am requesting that you and your staff provide an analysis of how the GOP repeal effort will affect Maryland and the more than 400,000 individuals who are at risk of losing their insurance.”

Sarbanes said about 290,000 Marylanders have gained insurance coverage under the health law through the expansion of Medicaid, the federal-state health program for the poor, and another 150,000 have bought health insurance through the state’s exchange. Most have gotten subsidies to afford the coverage.

Nationally, about 22 million people have been covered under the Affordable Care Act through public and private plans.

State legislative analysts concluded in January that outright repeal of the law would cost Maryland nearly $2 billion in Medicaid funding in the next fiscal year. The Republican proposal, however, would not reduce funding for the Medicaid expansion until 2020.

Advocates also fear that any reduction in the number of insured in the state could undermine a state program that gives Maryland hospitals about $2.3 billion in additional Medicare funding for working to slow the growth of health care costs.

The Republican proposal, while unlikely to pass in its current form, has become a rallying cry for advocates who point out that public support for Obamacare has been growing.

Jeananne Sciabarra, executive director of Consumer Health First, said the state’s most vulnerable will bear the brunt of the cuts.

And Dr. Leana Wen, Baltimore City health commissioner, said caps on Medicaid spending could put access to drug treatment out of reach for some at a time when opioid overdoses are at record highs.

Both Sciabarra and Wen said the proposed replacement bill cuts funding for Planned Parenthood, which jeopardizes reproductive health services for women, and scales back the package of benefits insurers are required to offer, which could reduce access to maternity care and mental health services.

But opponents of Obamacare are lining up as well, including businesses required to offer health insurance and others who oppose taxes included in the law and the mandate that people buy insurance or face penalties.

“Obamacare’s many failures are spiraling out of control,” Harris said in a statement. “For too long, Americans have seen their premiums skyrocketing, their deductibles soaring, and their choices dwindling. The Obamacare path is unsustainable and dangerous for our country.”

The Washington Bureau contributed to this article.