Maryland consumer advocates fear federal action thus far undermines state efforts to get the remaining uninsured coverage. The Trump administration has taken many steps that have weakened the ACA marketplace that provides insurance to millions. Last year, Congress repealed the tax penalty that required people to have insurance, or the individual mandate, and the Trump administrationbegan the regulatory process to free up cheap, non-compliant ACA health plans. Now, Republicans are trying for broader health reform this year and are looking atstarting with Medicaid. This is just the tip of the iceberg.

Since Donald Trump was elected, we’ve been thinking about ways to protect Maryland, President of the Maryland Health Care for All Coalition Vincent DeMarco told ThinkProgress.

Consumer advocate groups Maryland Health Care for All Coalition and Families USA worked with Maryland legislators and the state exchange, Maryland Health Connection, to safeguard the ACA mandate and, on Tuesday, announced a new plan: insurance down payments. 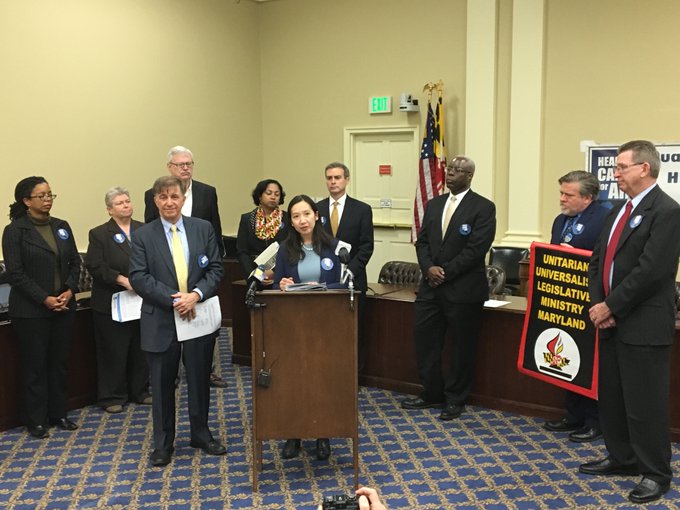 Maryland will reinstate a tax penalty for not having insurance. Like the federal mandate, a person will be charged either 2.5 percent of their income or a flat rate of $695 — whichever is more — for not having insurance. But Maryland’s plan goes further. When an uninsured person files their state tax return starting in 2020, they could either pay the tax penalty, and get nothing back, or use that money as a down payment to help pay for health insurance.
A person would file their taxes in the spring and sign up for health insurance in the fall. But if a person qualifies for a free health plan or Medicaid, they’ll be enrolled in a plan before open enrollment officially begins. If they aren’t automatically enrolled in a plan, money will be saved in an “escrow” account until open enrollment begins. Maryland Health Connection told consumer advocate groups they have the technical bandwidth to implement such plan.

If a person opts out of purchasing insurance, the money would go to the Maryland Department of Commerce. It’s unclear what Maryland would do with the money. State officials are kicking around the idea of a state reinsurance program, which is like insurance for insurance companies. Health experts have suggested using the tax penalty revenue to create a reinsurance program to lower premiums.

Families USA’s brainchild, which goes further than the ACA, is consistent with Maryland’s larger goal: get more people insured. DeMarco told ThinkProgress he hopes the federal government looks to Maryland’s plan as a potential example for national law.

Maryland is the first but is unlikely to be the last to push for state laws that safeguard current health law. Several other states are looking to protect the ACA mandate in different ways. But seven states will have to get creative as they have no state income tax, and as such, cannot impose a penalty by way of tax. State officials will likely face political and administrative hurdles when trying to implement these ideas.

Maryland state legislators intend to introduce this bill within the next coming weeks. Maryland’s bill will likely not kick in until 2020; the Republican tax bill repeals the mandate starting in 2019. Whether the bill can pass the state legislature or if Governor Larry Hogan (R) would sign such bill, DeMarco said he’s unsure. Tuesday is just the first step.