House Measure Would Allow Board to Investigate High-Priced Drugs

The Maryland House of Delegates has approved legislation that would create a prescription drug affordability board with the power to set “upper payment limits” on high-priced medications.

The Maryland House of Delegates has approved legislation that would create a prescription drug affordability board with the power to set “upper payment limits” on high-priced medications.

As amended, the legislation applies to health plans used by county governments and the state, impacting between 250,000 and 300,000 employees and dependents, according to Del. Bonnie Cullison (D-Montgomery), chairwoman of the House insurance and pharmaceutical subcommittee and the floor leader on the measure. 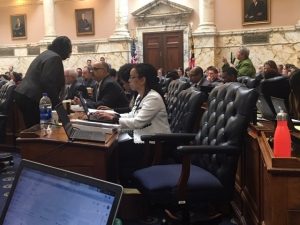 House Bill 768 would create a five-person panel, appointed by state leaders, with the power to investigate high-priced drugs — those with an initial cost above $30,000 for a single course and those that see a $3,000 increase in a single year, among others — and potentially set an upper payment limit.

Lawmakers from both parties acknowledged that the price of prescription drugs is causing hardship, but several Republican lawmakers expressed concern that the bill could inhibit the development of new medications.

Backers of the legislation brushed aside such concerns.

“In recent years, we have seen skyrocketing cost changes in things that used to be affordable,” said Del. Anne Healey (D-Prince George’s). “All of a sudden an EpiPen is $600. All of a sudden insulin is going up to $1,000. It’s ridiculous.”

“We have to start to make a stand against it.”

“This is a fair, proper bill and addresses something I know everyone in this House is concerned with,” said Majority Leader Kathleen M. Dumais (D-Montgomery).

She called the legislation — which as originally drafted applied to all health plans — “the perfect first step.”

Del. Jason C. Buckel (R-Allegany) predicted the measure will be ruled invalid on the grounds that it infringes on a section of law that is reserved for the federal government.

A measure the General Assembly approved in 2017, dealing with generic drugs, was overturned last year.

“We are going to run afoul of federal patent law by creating this price control on patented, exclusive products and saying, ‘Hey, we’re not telling you what you can charge for it … but I’m telling you what I’ll pay.’”

“We all want to do something to help people, to bring costs down,” he said. But “we’re not in control. We’re not God.”

The measure now moves to the Senate Rules Committee.

Vincent DeMarco, president of the Maryland Citizens’ Health Initiative, said Maryland may become “the first state in the country to establish this kind of board.”