…calling for the increase in the state’s tobacco tax by a dollar to reduce teen smoking and fund public health care programs. 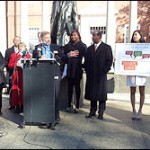 The Maryland Health Care For All Coalition has launched a campaign calling for the increase in the state’s tobacco tax by a dollar to reduce teen smoking and fund public health care programs.

Coalition President Vinnie DeMarco says that smoking has been reduced by 32 percent overall due to the last three hikes in the cigarette tax.

“That has saved over 70,000 lives from tobacco-caused death and illness and brought the state enough money to expand health care to over 100,000 lower income people,” DeMarco said. “We’re here to build on that progress.”

Among those in attendance for the press conference on Wednesday was Montgomery County Executive Ike Leggett who DeMarco says is a public health leader in Maryland who says that the state has another opportunity to take a giant step.  “When you think about it, we are dealing with a problem here that is preventable.  We are dealing with the lives of young people who unfortunately, far too often move in the wrong direction when it comes to cigarettes,” Leggett said.

The coalition says that there are over 500 education, community and religious organizations plus businesses who have signed on to endorse the initiative.  An OpinionWorks poll distributed by the coalition shows broad support for the tax increase which DeMarco says is a public health revenue measure.