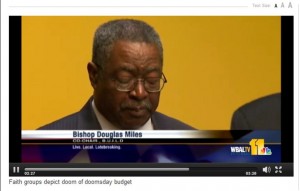 There are signs of progress on a possible special session to deal with the state budget as legislative leaders are expected to meet this week; however, no accord has been reached, which has fueled public pressure.

On Friday, House Speaker Michael Busch met with his budget team, which would support the version of the budget agreed to by negotiators on the last day of the session; however, there was no word Monday night on whether they’ve reached out to Senate President Mike Miller, who supports a slightly different tax package.

Meanwhile on Monday, members of Baltimore City’s clergy and city leaders added their voices to calls for a special session.
This is the scenario labor unions, some elected Democrats and a growing number of clergy envision if the so-called “doomsday budget” takes effect July 1.

“Health care issues, education issues, issues of public security, all of those things are of great concern for us,” said the Rev. Fred Weimert, president of the Central Maryland Ecumenical Council.

“You are talking about laying off state’s attorneys, laying off police officers,” said Baltimore City Council President Jack Young, who is shepherding a resolution in support of a special session.

“These decisions, which the Legislature failed to make, trickle down very hard on our communities,” said the Rev. John Deckenback, of the Chesapeake Association of the Central Atlantic Conference, United Church of Christ.

When Busch’s budget leadership team met last Friday, they agreed to support a compromise reached by budget conferees before the session ended. The compromise includes raising the income tax rate on taxpayers who earn $100,000 or more a year. Last Tuesday, Miller had broken an impasse in a letter he sent to Busch and the governor, calling for the figure to be lowered to $75,000 (More: Senate president suggests compromise in letter).

“Now is not the time for the political brinkmanship that is being played out in this state,” said Bishop Douglas Miles, co-chair of Baltimoreans United in Leadership Development.

Those who favor cuts over tax increases are making just as much noise. Republicans pointed out the $35 billion doomsday budget actually increases spending by $700 million (More: GOP OK with doomsday budget). Americans for Prosperity, a grassroots organization supporting economic freedom, is circulating an online petition against a special session.

Meanwhile, Gov. Martin O’Malley is still waiting for the presiding officers of the General Assembly to agree on a plan before calling a special session. “These guys have been arguing with each other since January. They are tired, they are frustrated, they are angry and they are not completely responsible for their own behavior,” said Matthew Crenson, professor emeritus at the Johns Hopkins University Department of Political Science.

Busch and Miller have agreed that a special session should be called by mid-May to give local jurisdictions time to balance their books. (Related: County Executive Kevin Kamenetz on how Baltimore County is preparing, and how Baltimore County has balanced its budget sans tax increases)

The governor has a bill signing ceremony scheduled Wednesday, but if an agreement is not reached by then, talk of a special session may once again overshadow accomplishments made during the regular session.