Alcohol May Come With A New Kind Of High:Taxes 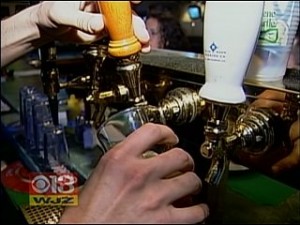 Alcohol may soon come with a new kind of high. It’s not stronger proof. It’s a higher tax. Alex DeMetrick reports supporters of a “Dime a Drink Tax” think they have a shot at making it happen in Maryland.
If you like to pull a cork, you might pay an extra 10 cents for every glass.
It’s called the “Dime a Drink Tax,” and it would hit all alcoholic drinks, if Maryland’s legislature approves it this year.
For supporters like health care providers, this may be a good thing. “Alcohol excise tax is a win-win for the state. They provide much needed revenue, and reduce alcohol consumption and related problems,” said David Jernigan, Johns Hopkins professor.
But an increase at restaurants and bars may not be such a good thing. Good times stopped rolling during the recession and business coming back now is still viewed as fragile.
“We’re still in this economic recession right now, and anything more is going to take people out of restaurants in Baltimore and Maryland. And that’s not good for the economy,” said Bill Irvin, Kooper’s Tavern.
The tax would also hit retailers, upping a six-pack by 60 cents and wine and spirits by a dime a serving.
“Some 44 percent of Marylanders do not drink. They will pay no tax,” said Jernigan.
The “Dime a Drink Tax” could raise $215 million in new revenue.
For light to moderate drinkers, the tax would amount to only $10.83 per year. The last time Maryland raised the tax on alcohol was in 1972.
Last modified: January 4, 2011
← Previous Story: Happy new year…
→ Next Story: Push continues for MD alcohol tax hike