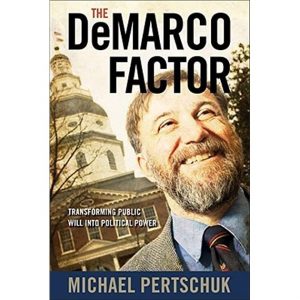 Vincent DeMarco is a long time advocate for public health causes including reducing teen smoking, underage drinking and gun violence, protecting our climate, making prescription drugs more affordable, and achieving quality, affordable health care for all.  He is the subject of a  book by former FTC Chair and Advocacy Institute co-founder  Michael Pertschuk entitled “The DeMarco Factor: Transforming Public Will Into Political Power.”

He played a key role in the enactment in Maryland of:  the life-saving tobacco tax increase of 2007 which funded expanding health care coverage to over 100,000 lower income Marylanders;  the alcohol tax increase of 2011 which reduced underage drinking; the Firearm Safety Act of 2013 which banned assault weapons and required the licensing of handgun purchasers; and, in 2019 three landmark measures, the Maryland Clean Energy Jobs Act which increased Maryland’s renewable energy requirement from 25% to 50%, the Maryland Easy Enrollment Health Insurance Program which made Maryland the first state in the nation to actively use the tax system to find and enroll uninsured Marylanders in health care coverage, and a measure which created the first in the nation Prescription Drug Affordability Board to make high cost drugs more affordable for Marylanders.

His work has resulted in legislation which has substantially reduced smoking in Maryland, giving Maryland the fourth lowest smoking rate in the nation,  reduced drunk driving deaths as a result of the alcohol tax increase, and has expanded health care insurance to over 300,000 people.

As National Coordinator of Faith United Against Tobacco, a national coalition of leaders from across the country working to reduce smoking, he played a key role in the enactment in June of 2009 of landmark national legislation to authorize the FDA to regulate tobacco products.

As an Adjunct Assistant Professor at the Johns Hopkins Bloomberg School of Public Health, he is working to educate public health students from around the world on effective methods of advocating for public health policies.

He has been recognized for his work by the organizations such as the Baltimore Sun which declared him “Marylander of the Year” in 1988, the Central Maryland Ecumenical Council which awarded him its 2002 “Ecumenical Leadership Award” and the Daily Record which named him one of Maryland’s 60 most influential people in 2010.  Additionally, he received the American Public Health Association’s John D. Slade Memorial Advocacy Award in 2013, the Lifetime Gun Violence Prevention Award from Marylanders to Prevent Gun Violence, and the Andrus Award for Community Partner of the Year from the Maryland AARP, both in 2017. Most recently he was named the 2020 recipient of the Andy Hyman Award for Advocacy from Grant Makers in Health.