Pharma balked when Maryland tried to regulate prescription drug costs; now they have to contend with California

Generic drug manufacturers suffered a setback in court late last month when a federal judge dismissed one half of their argument against a new Maryland law regulating price gouging and cast doubt on the other. They suffered an even bigger one Monday when California Gov. Jerry Brown signed a prescription drug price law that is in some ways even more sweeping than Maryland’s.

The Association for Accessible Medicines argued that 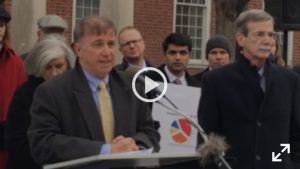 Maryland’s law, which allows the attorney general to seek a justification for — and potentially sue to stop — an “unconscionable” price increase in an essential generic or off-patent medicine, violates the Constitution’s interstate commerce clause and the 14th Amendment’s due process protections. Federal Judge Marvin J. Garbis rejected the first contention but found it at least plausible that the 14th Amendment claim could succeed on the grounds that the statute is too vague.

In the meantime, though, developments in California put the dispute over Maryland’s law in an entirely new light.

The portion of AAM’s complaint that Judge Garbis rejected contends that because generic manufacturers and wholesalers are mainly based in other states, Maryland was regulating interstate commerce. But the applicable precedents, Judge Garbis noted, deal with statutes that seek to regulate price parity between states. Under the Maryland law, he wrote, generic drug manufacturers “may raise prices to make profits in other states — even to uncontrolled levels — but not for drugs made available in Maryland.”

But what the drug manufacturers are really worried about is not whether they might have to sell their products for lower prices in one relatively small state. They’re worried that other states might follow suit. On that score, there is no more important state than California, and the price transparency law Governor Brown signed could have the effect of strengthening efforts to hold down prices in Maryland, New York and other states that are considering similar measures.

The California legislation lacks some of the teeth that Maryland’s law does; it doesn’t authorize the state to sue over price increases or impose penalties. But it addresses the second plank of the AMA’s Maryland lawsuit in a way that drug manufacturers surely won’t like. Much of the debate in the final days before Maryland’s bill passed was over what specifically would count as “unconscionable,” with pharmaceutical manufacturers contending that it should align with a separate requirement in the bill that the Maryland Medical Assistance Program notify the attorney general of any price increases exceeding 50 percent over the previous year. The legislation that passed does not tie the reporting and enforcement criteria, instead defining “unconscionable” as an increase that is “excessive” and not tied to the costs of producing the drug, among other criteria.

The California law, though, is specific and much stricter — any increase of 16 percent or more over two years triggers reporting requirements, including documentation justifying the increase. Though California’s legislation may accomplish nothing more there than to focus public pressure on companies that seek large price increases, it also lowers the bar on a national basis for what might be considered excessive and has the potential to flag more drugs to the attention of regulators in Maryland and other states. If drug manufacturers’ remaining legal complaint against Maryland’s law is that it should set a clear, quantitative measure for what constitutes price gouging, legislators here can give them one — and after California set the standard at 16 percent over two years, you can bet they won’t settle on anything close to 50 percent in one year.

AAM is appealing Judge Garbis’ denial of an injunction to the 4th Circuit Court of Appeals, but it is increasingly clear that the momentum is on the side of those who believe it is in the public’s interest to stop the runaway growth in prescription drug prices. Hundreds of generic medications have experienced what the federal Government Accountability Office termed “extraordinary” price increases during the last several years. Lawmakers cannot stand by while the quest for profits puts lives on the line.